The Nightmare of Ashihama, or The Nightmare, is a large, otherworldly horror boss monster who feeds on the life force of sleeping people, giving her victims horrible nightmares until their life force is completely drained and expires. There are no requirements to fight The Nightmare.

How to get there

Players will be able to teleport to The Nightmare by typing ::nightmare, by using the teleport menu (click on world map or press CTRL + T to open) or by using the quick teleport in the activities quest tab. 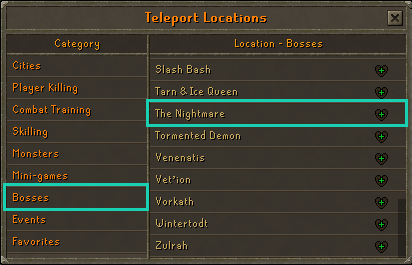 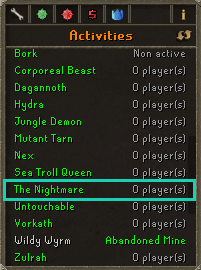 When using the teleport, players will be teleported here (see below). Do not worry, this is a safe area. The Nightmare will not start until you create an instance. 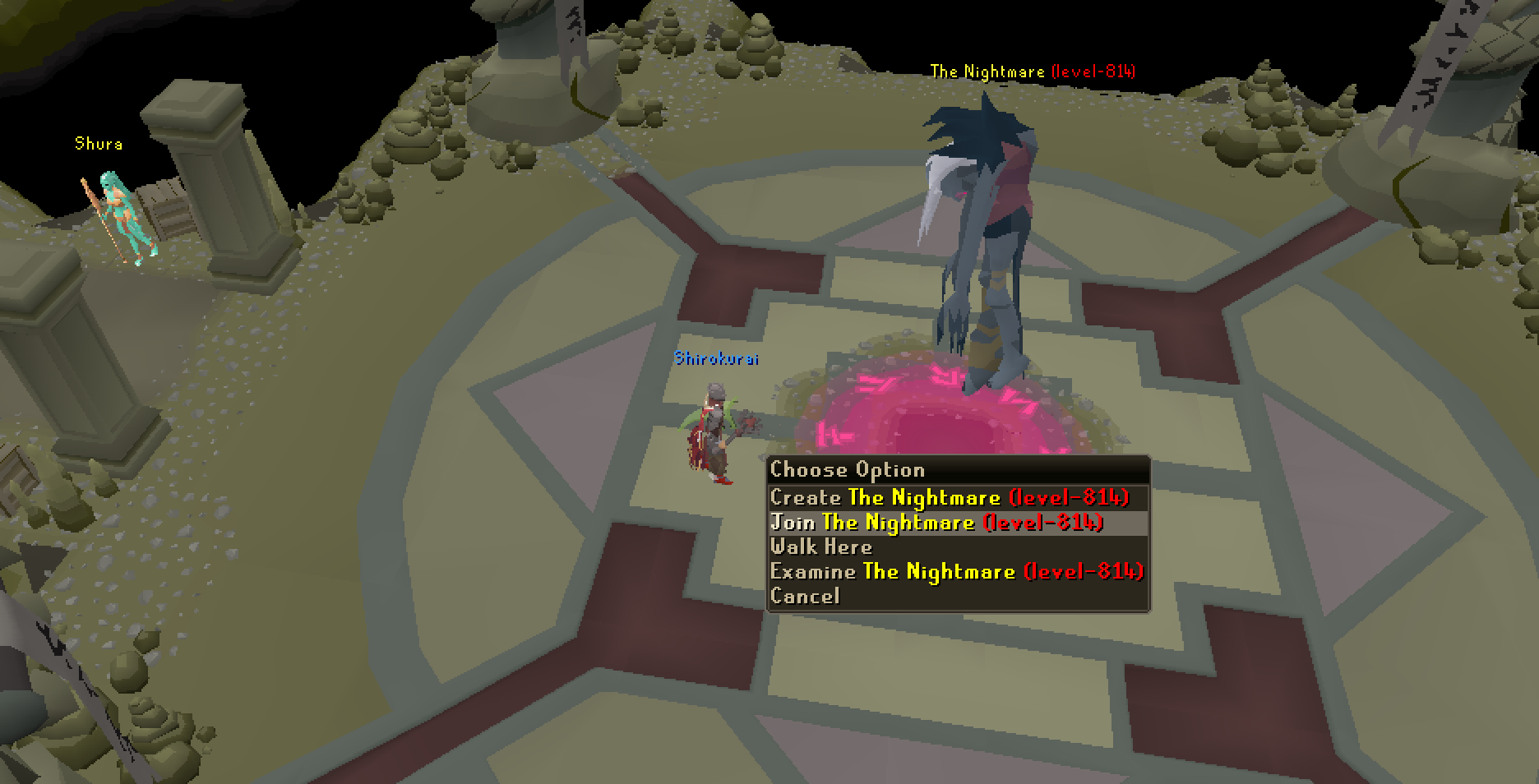 Players will be able to join or spectate any non password protected instances by right-clicking on The Nightmare > Join.

300M and for Phosani's Nightmare it will cost

600M. These prices do not change with donator rank, however the cost is lower for ironman and hardcore ironman.

75M for The Nightmare (regular) and

25M for The Nightmare (regular) and 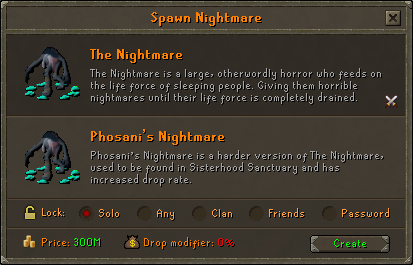 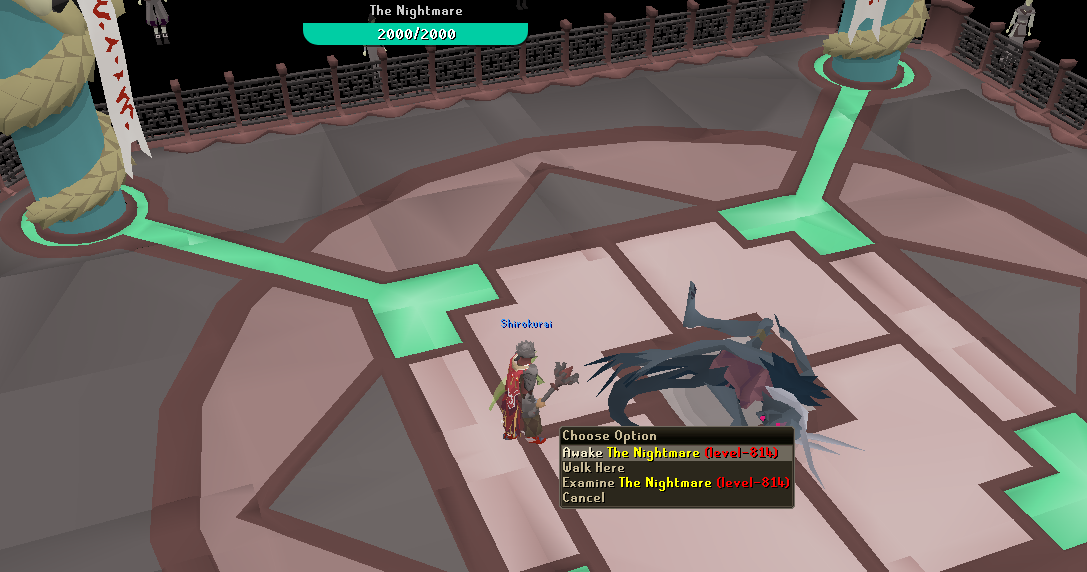 Before awakening the boss, players have the option to switch to the other version of the boss if they want to:

Players will be able to exit the instance by passing through the north or south barrier. Be aware: this will NOT refund the coins spent on creating the instance or respawning the boss.

Party sizes with over 20 players will have the same cost as a 20 player party size. The respawn cost is capped at 20 players.

Players can not damage the boss physical health directly - instead, they must break her shield during each of her three phases. Once the shield is broken, players must attack all four totems in each corner of the boss room to charge them.

When all four totems are fully charged, they will unleash a magical blast of energy onto the boss and deal 800 damage to it. The boss has a total of 2400 phyiscal health and will not regenerate its health unlike other bosses.

One thought to keep in mind: the boss only attacks players directly infront of it.

The boss will choose a "tank" in your party based on their defence bonus and defence level. If your party has a designated tank, they should use Deflect Melee prayers and switching to Deflect Ranged or Deflect Mage when needed. The rest of the team should stand on different sides than the tank, so that the boss is not facing them and won't attack them.

During this phase, the boss will use the special attacks Grasping Claws, Husks and Flower Power. Use the correct prayers (explained above) to prevent dying by these special attacks.

Once all totems are charged, the boss will take 800 damage and move on to phase 2.

The boss will use her Sleepwalker attack at the start of this phase and will deal a big amount of damage to the party if not all Sleepwalkers are killed.

During this phase, the boss will use the special attacks Grasping Claws, Curse and Parasites. It is recommended to immediately drink a Sanfew Serum once the boss infects you with a parasite, otherwise the parasite will burst out of you and rapidly heal the boss.

Once the shield is fully broken, switch to your magic gear and attack and charge the totems like in the previous phase in order to move on to phase 3.

If the boss uses the Parasites attack while players are attacking the totems and it bursts out of the players, the parasites will rapidly heal the totems instead of the boss - so make sure to take the parasites down as soon as possible.

Once all totems are charged, the boss will take 800 damage and move on to the final phase: phase 3.

This phase will begin with a Sleepwalker attack like in phase 2. During this phase the boss will use the special attacks Grasping Claws, Spores and Surge. Make sure to stay atleast 2 tiles away from the spores to not get infected. If you do get infected, stay atleast 2 tiles away from your teammates - the infection will spread! The spores will not only lower your damage, but also makes you unable to run, which can be fatal if the boss uses her Surge attack.

Once the shield is fully broken, switch to your magic gear and attack and charge the totems like in the previous phases in order to move on to defeat the boss.

Most common gear and inventory