It can be hard starting off in an unfamiliar game, so this page was created to help out new players, and teach them some useful stuff for getting started. To introduce neww players to how the server works players can now type ::Tutorial This command will show players about most aspects of the server. You also complete a task and get a reward for doing this.

When you make your very first Etherum account, you will be given the option to pick how you would like to start out, each account type has its own advantages, but apart from the ironman/hardcore ironman modes, they are not very restricted. 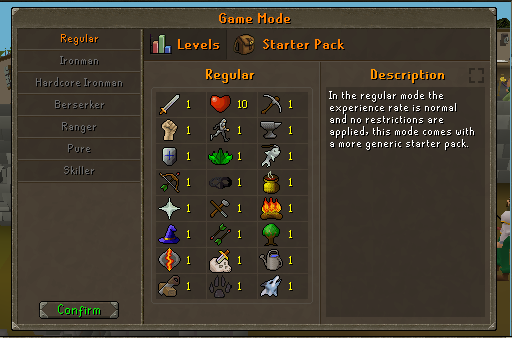 In the regular mode the experience rate is normal, and no restrctions are applied. This mode comes with a basic starting pack. You will start with level one in all skills (apart from hitpoints which will be level 10)

Ironman mode is a game mode that requires you to gain all your items on your own. This means you cannot trade, duel, dice, or even kill other players for their items. The experience rate for this game mode is 3x lower than a regular account.

Hardcore ironman mode is similar to ironman mode. However, along with the ironman restrictions you will have only 50 bank slots to use, earning coins is much more difficult and if you die, all of your progress will be reset. The experience rate for this game mode is 6x lower than a regular account.

This mode is similar to regular mode. However, it is aimed to get players ready to Pk quickly, and avoid time spent training combat skills. You will start with:

Another mode that is made for players to quickly get into the game. It may suit you're account better if you are wanting to have a lower combat level for pure Pking. You will start with:

A skiller is an account which tries to level up all skills, while avoiding combat. This mode starts you off with a few basic resources. You will start with:

Where to Train Combat

Many players play this server to fight other players and NPC's. There are a few ways to reach your desired combat stats as quickly as possible.

The first is by typing ::pure, ::zerker, or ::maxed. These commands will set your stats to appropriate levels for the coresponding build. For a more customizable option, you can click on each of the combat skills in the skill tab and set them to your desired level, individualy. The only downside to this is that any skill which has been set, will not appear on your highscores page. If you would like to appear on the highscores page again, simply reset your skill to level 1, and train it normally.

A player who wants to train their skills legitametly should give Sir Vant's Training Area a try. This area is designed to make starting your account as easy as possible. It is even free of charge for players with less than 5 hours of playtime.

Here at Etherum, we want players to be able to get right into combat as soon as they start the game. This requires an easy way to obtain some starter equipment.

To get starter items, players can visit the Combat Table by typing the command ::pksupply, this command will bring you right next to the table. At this table you can find a wide range of free items to use. 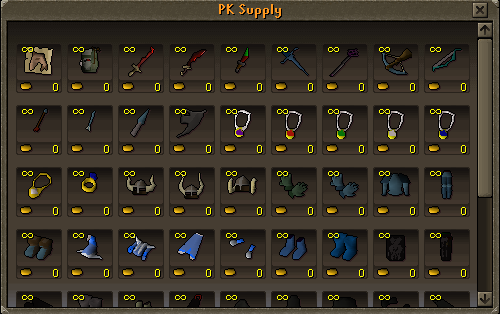 To start off, teleport to the Edgeville Marketplace by using the command ::ge and steal from the stalls. This isn't the most efficient way of making money, but it will suffice until you have the skills to improve your money making methods. A more in-depth guide on making money can be found here.

There are a total of 22 different skills to train here at Etherum. Most skills are fairly straight forward, once you know where to start. Check out our skill guides for more information.

Becoming a known player within the server is easier said than done. It can take months of playing for people to recognize your name. One of the easiest ways of becoming a known player is by donating for membership, and using the ::yell function to talk/help to players and by being respectful to others.

If you do this, you will become a known player rather quickly.