Attack is a very important skill to those who are a keen to fight. The higher a players Attack level is, the more accurate their attacks will be in melee combat. Another advantage to this skill is that it allows you to wield weapons of stronger materials which often have higher stats and deal greater damage to your enemies. Attack is a fast skill to train here on Etherum as it has high experience rates.

You can start at Edgeville. Inside the building north-west of the general store, you will find an NPC that sells basic gear. You will want to look for "Oziach". You can get more basic gear and weapons at the table at ::pksupply inside edge bank. All these items are free. Melee weapons vary in their attack styles. Some weapons have four options, with a controlled option, while others have only three options. Players intending to remain a pure with no Defence need to take care when changing attack styles as you may gain unwanted Defence levels. 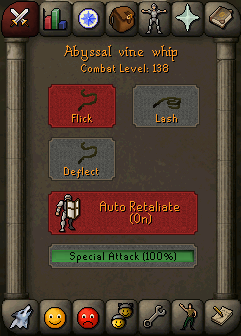 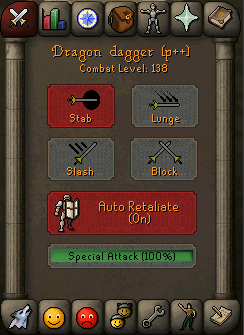 The Controlled combat style is usually the bottom left option of the combat style interface if there are 4 options, or the top right option if there are 3. When using the controlled style for every point of damage you deal, you gain 200 experience in Attack, Strength, and Defence and 150 experience in Hitpoints. Using the controlled style provides an invisible +1 boost to your Attack, Strength and Defence levels. This attack style is only available in some melee weapons. 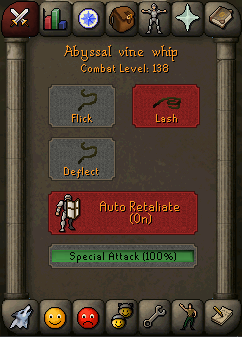 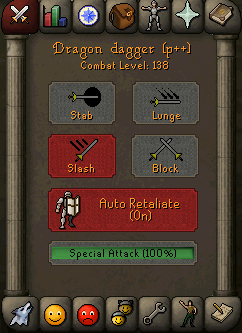 The best place to start training any combat skill at a low level is at Rock Crabs. Here you will find the Rock crabs that can be killed in order to start levelling up your combat stats. Start killing these until you feel you have a high enough Attack level to move on to killing other monsters such as Hill Giants, in Edgeville Dungeon or Yaks on Neitiznot (South).

For players with higher levels, the best place train would be at the Bandits Camp, located in the desert.

Then select "Combat Training" for the category, and then "Bandits Camp" Here you will find a large amount of Bandits that will automatically attack anyone who is wearing Saradomin or Zamorak equipment, allowing for easy AFK experience.
An easy god item to obtain are the god capes from the mage bank. To get these simply teleport to the mage bank, in the 'Player Killing' category, when you arive, enter the pool and then follow the path north. Pray at one of the three statues, if you got the Guthix cape, choose another statue.
Once you have a Zamorak/Saradomin item, simply wear it and the bandits will attack you.

It is recommended to bring a bunyip summoning, as they heal you between 1-10 Hp every 15 seconds.

If you are planning on training all your skills, it might help to do slayer at the same time as training combat. You can find a Slayer guide Here.

Items that you may use to increase the Attack skill:

If you reach level 99 in Attack, you can talk to the Wise Old Man at home to obtain the Skill cape. He is located at home, in the building north of the bank. The skillcape costs 30 million coins and comes with a matching hood. Both the Attack cape and hood give +9 bonus to all defense stats.

If you reach 200m experience in the Attack skill you will also unlock the ability to buy the Master Attack Cape. It is exactly the same as the normal Skill cape. However, you can adjust the trim colour to whatever you like. This master skillcape costs 80 million coins. 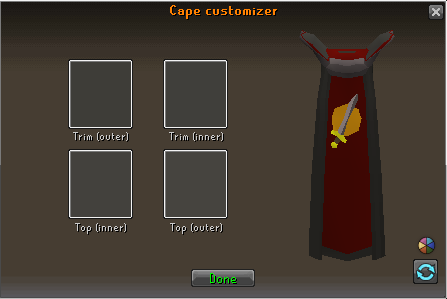